Posted on April 25, 2013 by MissUnderstood Genius

You wanna be where you can see that people are all the same… You wanna be where everybody knows your name. An old song, I know. But the bottom line is clear, we all feel better when interacting with others using our names. So, let’s do it and make life a little bit better.

We are now in the days of hiding behind a computer and, we forget to get personal. It makes even the most 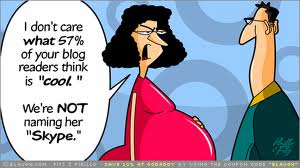 nonchalent/defensive of people relent when you refer to them by name when affirming, or even repeating, something they’ve just said.  If you put in such efforts to make people feel they matter, it certainly pays off, It’s a hoot to see the look in their eyes when they do not expect it.

At restaurants, I notice that the wait staff doesn’t seem to wear nametags anymore and sometimes I have to ask their names, but its nicer to say, “Excuse me, Sandy” rather than “Hey!” when you need something from them.  I think anyone appreciates being called by his/her name vs. something generic (especially the ewwwwww-inspiring “honey/sweetie/babe” that some women get.)

Ask a question using a name and you are more likely to get the positive answer than just using the question without the name. Referring to someone by their name is a moment of connection, whether in a professional or social situation. This helps build the relationships that lead to success.  The other side of the coin, introducing yourself and stating your own name when meeting someone new, is just as important.

Often in business situations people use full names. If I am going to have an extended relationship with the person I like to ask how they prefer to be addressed. Some people prefer James, while others prefer Jim. I like to call people by the name they prefer, but if you don’t ask, you don’t know. If someone prefers Jim and you keep using James, it is noticeable and can be uncomfortable to the person. Depending on the relationship, they may be uncomfortable correcting you.  I will add one more thing. If you are being formal and using an honorific, use the right one. Professor Jones may not like being called Mr Jones. General Smith probably does not like to be called Mr Smith. And Dr Barnes may not like Miss Barnes.

Dale Carnegie said, “Remember that a person’s name is to that person the sweetest and most important sound in any language.”

Sometimes I ask people about their first name. Many times folks love telling me the story behind their name, how they got it, why they have it, and it can be really fun to hear. Within 60 seconds, I know a lot more about them and their family history. I have always been a strong believer in building rapport and the name is always the first step.

It’s the little big things (in this case being called by name) that can make the difference in business and interpersonal relationships. If only more could adopt this simple courtesy. Indeed what you get by personalizing communication is really priceless. It is true that everyone likes the sound of heir own name and using it helps you to remember it. However, do not fall into the trap which some sales people have of inserting the name into every single sentence! Keep in mind:  “It’s my name, don’t wear it out.”

The only caveat being the importance of getting the name right. There are several reasons why mistakes may happen – assumed surnames, a surname that could be a first name, unknown transposition, etc. To be personal courtesies, names must be more than automated fill-ins for numbers.

Tip: Be careful in the UK.  They don’t like overfamiliarity and certainly don’t want their first names written on paper coffee cup when they just want a cup of coffee.